You don’t have to look hard to find examples of the porous boundaries between politics and entertainment. Political information is presented in entertainment formats from Buzzfeed lists to satirical news shows, Russell Brand is calling on us to ditch capitalism, and David Cameron wants you to know that he like, totally loves Game Of Thrones.

The way that politics is represented in fiction is something I’ve been thinking about since reading Stephen Fielding’s A State of Play (2014). Fielding looks at representations of politics and democracy in British novels, plays, TV and film, and how these have changed over time. He argues that fiction has played an under-appreciated part in constructing people’s understanding of politics, and should therefore be taken seriously.

The first shows which spring to mind are those which revolve around politicians and their advisors, such as The Thick of It, The West Wing, or House of Cards. But politics can be found in all our favourite shows; sometimes I think I studied politics just so I’d understand the many political jokes in The Simpsons which zoomed over my head as a child.

In 2014, Jonathan Freedland wrote a piece about how popular culture shapes US politics, citing a Republican strategist claiming after their 2012 defeat that they were ‘a Mad Men party in a Modern Family America’. According to Freedland, Modern Family has had a small but meaningful influence on attitudes toward equal marriage, by featuring characters Mitch and Cam as parents ‘as flawed and loving as any others’. Hillary Clinton is often namechecked as a role model by their niece, Lisa Simpson style overachieving middle child and feminist Alex Dunphy. But as well as tackling current political issues, one Modern Family storyline uses the process of politics as its backdrop.

Claire Dunphy takes on the Council

Frustrated by a dangerous intersection near her home, Claire Dunphy (Jack’s miracle) starts a petition to get a stop sign. When she goes to present the signatures to the local traffic committee, she is dismissed by smug long-time local councillor Duane Bailey (Tobias Fünke). When Claire runs into Bailey campaigning for re-election, he has already forgotten who she is. Frustrated at his arrogance, Claire is persuaded by husband Phil that she should run against him. When Bailey finds out he mocks Claire, telling her ‘I’ve won six straight elections and I don’t plan on losing to some bored housewife, so don’t quit your lack of a day job’. This, combined with trouble at home under Phil’s watch, makes Claire doubt that she has the experience to run for office or that she would be able to combine this with caring for her family. Convinced by her dad’s wife Gloria that her doubts are caused by fear of failure, Claire decides to go for it.

In two later episodes, the campaign unfolds. With a local newspaper reporting that voters find Claire ‘angry and unlikable’, her family hold a mock debate to prepare her to face her opponent on public access television. This quickly descends into chaos as her kids point out every unappealing facial expression and gesture Claire makes. At the real debate, Bailey tries to trip Claire up by referring to obscure council regulations, but she has done her homework. Unable to attack her for being inexperienced, Bailey brings up an embarrassing personal incident. Earlier in the season, Claire’s husband Phil had accidentally entered the wrong hotel room and posed naked, in a Valentine’s Day surprise gone very wrong which ended in his arrest. Phil stands up to defend himself, in a cringey outburst which is autotuned and uploaded to YouTube.

When election day finally rolls around Claire enlists her family to help get out the vote, but most screw up their tasks; her dad Jay doesn’t even manage to vote. Claire doesn’t have a much better day herself as her false tooth being knocked out by a microphone just before a radio interview, making her sound like a drunk Ed Miliband impersonator. She loses the election, but does get the stop sign she had wanted in the first place, left by her victorious opponent with a sarcastic note. This moment of regained pride is cut short, when a car speeds straight past the new sign. 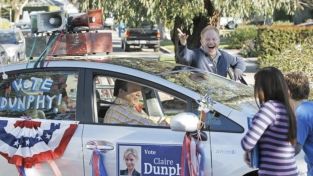 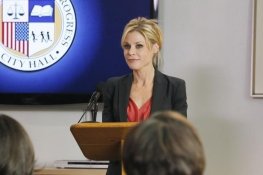 There were a couple of things about this storyline which caught my attention. I loved the scene where Claire’s family host a mock debate and instantly start giving her grief about her facial expressions; even the Dunphy kids who don’t have any interest in politics have picked up that candidates are not necessarily judged on their statements. But the moral of this story is that normal people, particularly normal women, face an uphill battle for political power. Claire is constantly belittled and forced to prove herself by a long-standing incumbent who does not care about the people he is elected to represent. His arrogance goes unnoticed, but the local press report that her assertiveness is unattractive. Claire worries that if she wins she won’t be able to balance the role with caring for the family her male opponent mocks her for having and uses against her, and while her family support her they ultimately do her campaign far more harm than good.

For political leaders, family life can be a key way of ‘performing ordinariness’. In his book Intimate Politics, James Stanyer (2013) found that coverage of leaders’ family lives has increased over time, and that the extent to which a politician needs to bond with citizens to attract support is one of the factors which drives the extent to which they will willingly reveal personal details. However, this doesn’t work the same way for male and female politicians. Family life is seen as a laudable bonus for male politicians, but an insignificant necessity for women, whose families are more likely to be represented as suffering as a result of their ambitions. Liesbet van Zoonen (2005:91) argues that male politicians are presented as ‘living in an integrated world of public and private duties, while female politicians are presented as living in two conflicting worlds’.

The other side of this is something we see frequently in the media treatment of politicians who don’t have children, something which is emphasised and questioned for women but largely ignored for men. For women with political ambitions, family is both a necessity and a liability. Had the Claire Dunphy character not had children, rather than attacking her for being a housewife her opponent may have questioned her ability to represent local people. A woman without children is questioned about whether she is representative, a woman with children about whether she is up to the job. 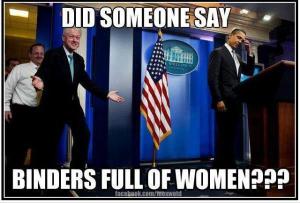 While shows like The West Wing have (justifiably) been paid a lot of attention, representations of political issues and the political process can often be found in entertainment when you are not looking for them. Sometimes, even in a wacky family sitcom, these storylines can feel uncomfortably close to real political problems which we’d be better off consigning to history and fiction.

Steven Fielding (2014). A State of Play: British Politics on Stage, Screen and Page, from Anthony Trollope to The Thick of It. London: Bloomsbury.