This week the BBC held ‘World On The Move’, a day of special programming on migration issues, and I was lucky enough to to attend Angelina Jolie Pitt’s keynote speech. Jolie has worked with the UN for the past 15 years, becoming Special Envoy to the United Nations High Commissioner for Refugees in 2012. During this time she has made 50 visits to the countries most affected by displacement. In her speech, Jolie warned that the international humanitarian system is breaking down and called on nations to work together, describing the crisis as a ‘major test of our values and our resolve’. While emphasising the need for countries to take responsibility for accepting many more refugees and putting transparent and efficient processes in place for this, Jolie argued that unless countries worked together to ‘address the root causes of the crisis’, the number of refugees crossing borders would continue to increase and the crisis worsen. Jolie’s speech and Q&A can be viewed in full here.

The talk and brief question and answer session that followed gave an interesting insight into her role as a high profile ambassador for the UN, and what celebrity activists can, and perhaps cannot, contribute to important debates in this context. Here are a few thoughts:

‘I know that no one can speak for 60 million displaced people, and I know that it is the democratic right of the citizens of each country to reach their own conclusions about the right way forward. I therefore put my thoughts before you with humility and respect, seeking to understand all points of view.’

While Jolie made no reference to her career, fame or wealth, the above quote struck me as an acknowledgement that not everyone will perceive her as a credible or authoritative voice on the refugee crisis. Jolie clearly sees it as part of her UN role to lobby leaders to engage with each other and the UN, and she said she would be ‘pressing my own government and speaking loudly about it’. However, given her ‘disappointment’ with the US government and acknowledgement of broader political barriers to a solution due to a ‘politics of fear and separation’, it is unsurprising that Jolie also directed her plea for action toward citizens, calling on us to  ‘demand our governments show the leadership necessary’.

I was interested to hear Jolie call for a ‘rational centre’, rejecting solutions driven by emotion or ‘naïve humanitarianism’ as well as arguing that countries need to prioritise tackling the ‘root causes’ of the crisis. This is a contrast with criticism of celebrity activists as promoting superficial, populist changes over long-term solutions. But with Jolie’s activism so strongly tied to the UN, perhaps this shouldn’t be surprising. Her speech not only overtly reflected her UN position by criticising the underfunding of UN appeals and calling for international cooperation as the only viable option, but was also reflected in her advocacy of a ‘rational centre’ which rejected calls for open borders.

Jolie’s rejection of ‘emotional’ responses went hand in hand with her tone during the speech. While she spoke of her anger, she did not really show it, presenting a very professional image both in her appearance and tone. Given Jolie’s experience, I was expecting more personal, emotive stories from her trips to convey her argument. Perhaps there is a perceived need as somebody who became famous as an actor but also as a ‘wildchild’ in gossip magazines to project a serious image, and as a UN envoy and a woman to appear ‘statesmanlike’.

Jolie did take a more personal approach during the Q&A, but this did not always feel convincing. This was not necessarily Jolie’s fault; the use of stories about people you have met in response to audience questions now feels very reminiscent of how politicians deal with questions they don’t want to answer. One response, to a journalist who challenged Jolie’s distinction between economic migrants and refugees based on her experience of fleeing Afghanistan, did feel a little uncomfortable; her gushing over what great, self-sufficient people she met in Afghanistan brought Jolie’s privilege as a wealthy white celebrity back to the front of my mind. But in other ways it is her personal experience which makes her so compelling, as she has an ability to contrast the situation for refugees in different countries over the last 15 years that many politicians don’t. 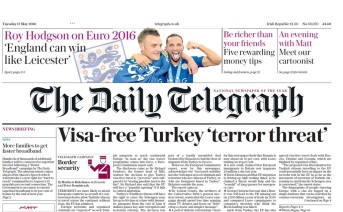 When Angelina Jolie speaks people listen, but they don’t necessarily repeat her message. While her speech was covered widely by online news sources, Jolie’s plea for international cooperation and hope for a better tomorrow was overshadowed in the mainstream press by former MI6 head Sir Richard Dearlove’s argument that allowing visa free access to the EU for Turkish citizens would be ‘like storing gasoline next to the fire one is trying to extinguish’. The BBC were criticised for pro-EU bias, and Jolie for allegedly ‘sticking her nose into’ the referendum debate despite not explicitly mentioning it, even though Dearlove has advocated Brexit. That his argument was given greater prominence than hers suggests that fame, even to the extent that Jolie possesses it, is not enough to rewrite news cycles rather than simply be written into them. Coverage of Jolie’s talk also frequently focused on her brief criticism of Donald Trump, an issue she was reluctant to address when asked.

How much of a difference can Angelina Jolie make?

Jolie’s talk left me impressed by her experience, eloquence and dedication, but also curious about what she might say about the refugee crisis in private, without her UN hat on. When asked whether she had hope, she responded that you ‘have to’, and that we have been through darker times and ‘risen from the ashes’.  But Jolie, in keeping with her argument against ‘naïve humanitarianism’, did not neglect discussion of the barriers to the international cooperation she argues is necessary to address the root causes of the crisis. In this context, can her lobbying of political leaders or efforts to persuade citizens to do the same make much difference? It would be fascinating to know whether and how she feels she can really do so, but I would never have the courage to ask and she is much too professional to tell.